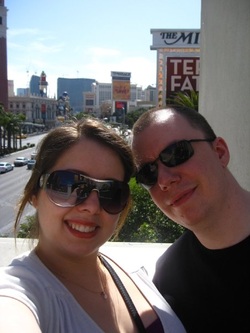 David can't wait to tell the grandkids how we met. We both were in The Rocky Horror Show. If you don't know that show, let's just say that we were both wearing fishnet stockings. We became friends and eventually started dating. David won me over when he brought me a homemade Greek chicken pizza one evening, when I had a particularly rough day. The stomach was the way to this girl's heart! We officially called each other boyfriend and girlfriend on October 1st, 2004.

While it may not have been love at first site, it wasn't too far off. We became inseparable pretty quickly.

We took a trip to New York for the Bat Mitzvah of his cousin in late 2007. I had no idea that he would propose. We had talked about getting married, and thought we had found "the one," but were in no rush. During a romantic dinner at Tavern On the Green in Central Park, David asked me to marry him with a beautiful ring that belonged to his great grandmother. In oblivious Natasha fashion, I almost missed it because I was trying to butter bread and look for a straw for my drink. We are finally ready to celebrate with all our friends and family in one of our favorite vacation destinations- Fabulous Las Vegas!